A film guide for February 2012 including reviews for:

In Retrospect is a monthly film publication that I make just for a bit of fun, visit the blog here. 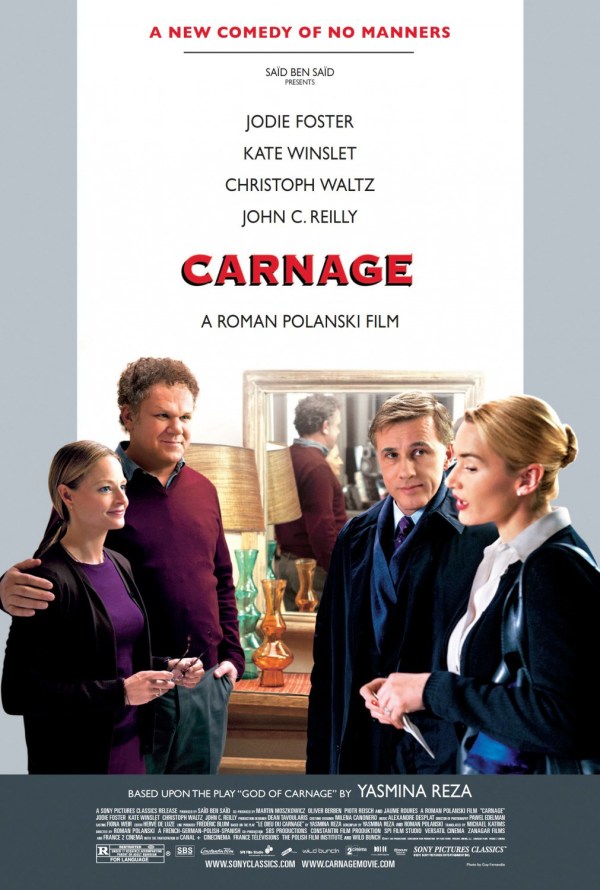 (Published in Issue 7 of my publication In Retrospect)

Co-written and directed by Roman Polanski, Carnage is a black comedy that follows two sets of parents, Penelope and Michael Longstreet (Jodie Foster and John C. Reilly) and Nancy and Alan Cowan (Kate Winslet and Christoph Waltz), who meet to discuss their sons’ behaviour after having been in a fight at school. But what was intended to be a five-minute apology turns into over an hours worth of arguments, drinking and judgments from all corners of the room, as it soon becomes apparent that their sons’ childish behaviour is something they all have in common.

END_OF_DOCUMENT_TOKEN_TO_BE_REPLACED

2012 has only just begun, and we’re already talking about some of the amazing films that are set to be released over the next year. With many anticipated films that have already been released in the US that we are yet to see, to the many Marvel films that we are frantically waiting for, we won’t be short of great films to put on the ‘to see’ list. Let’s not forget Peter Jackon’s The Hobbit as well, of course.

So, films of 2012, assemble! Here’s a list of what to look forward to this year, and also a few that you may want to avoid.

END_OF_DOCUMENT_TOKEN_TO_BE_REPLACED

This week has seen the overall box office suffer its worst weekend since 2008, but one British movie has enjoyed robust numbers whilst another two are continuing their successful theatrical runs. There’s also some great new films set to be released over the next week that feature a number of Brits in their cast, including the Sherlock Holmes sequel, Roman Polanski’s Carnage, Mission Impossible 4 and David Fincher’s English adaptation of The Girl With A Dragon Tattoo.

END_OF_DOCUMENT_TOKEN_TO_BE_REPLACED

A new poster for Roman Polanski‘s Carnage has been released this week, but unfortunately it doesn’t do much in the way of promotion.

Written and directed by Roman Polanski, the film is based on the acclaimed play God of Carnage by French playwright Yasmina Reza and premiered at the 68th Venice International Film Festival this year.

END_OF_DOCUMENT_TOKEN_TO_BE_REPLACED

A government ban on the Carnage UK pub crawl event has been called by The National Union of Students because it “encourages irresponsible drinking.”

Carnage UK set up pub crawls around the UK for university students and have been criticised after a student was caught urinating on a war memorial. The NUS now want to ban the event.

Carnage organise events for an estimated 350,000 undergraduates in 45 towns and cities every year. Students pay £10 for a Carnage T-shirt which gives access to several bars and clubs in the area.