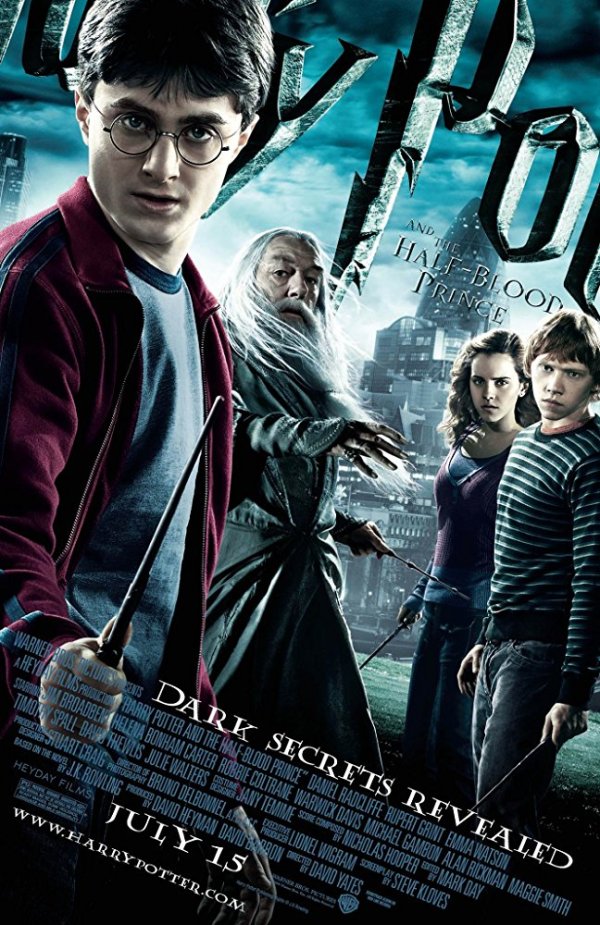 Directed by David Yates and based on the sixth book in J.K. Rowling‘s Harry Potter series of novels, Harry Potter And The Half-Blood Prince sees Harry (Daniel Radcliffe), Ron (Rupert Grint) and Hermione (Emma Watson) enter their sixth year at Hogwarts, as both the muggle and wizarding world are under Voldemort’s tightening grip. Meanwhile, Dumbledore enlists the aid of resourceful yet unsuspecting bon vivant Professor Horace Slughorn (Jim Broadbent) as we learn more about the dark past of the boy who grew up to become Lord Voldemort. Does Slughorn hold the key to their enemy’s Achilles’ heel?

END_OF_DOCUMENT_TOKEN_TO_BE_REPLACED

Directed by Mike Newell and based on the fourth book in J.K. Rowling‘s Harry Potter series of novels, sees Harry (Daniel Radcliffe), Ron (Rupert Grint) and Hermione (Emma Watson) return for their fourth year at Hogwarts as Harry’s famous lightning-bolt scar begins aching and causing him mysterious visions. Introduced to yet another Defense Against the Dark Arts teacher, former dark wizard catcher Mad-Eye Moody (Brendan Gleeson), Harry’s wishes for an uneventful school year are almost immediately shattered when he is unexpectedly chosen, along with fellow student Cedric Diggory (Robert Pattinson), as Hogwarts’ representative in the Tri-Wizard Tournament. Worse still, Harry doesn’t realize that the most feared wizard in the world, Lord Voldemort (Ralph Fiennes), is anticipating the tournament, as well.

END_OF_DOCUMENT_TOKEN_TO_BE_REPLACED

Directed by Alfonso Cuarón and based on the third book in J.K. Rowling‘s Harry Potter series of novels, Harry Potter And The Prisoner of Azkaban sees Harry (Daniel Radcliffe), Ron (Rupert Grint) and Hermione (Emma Watson) enter their third year at Hogwarts as trouble begins to brew when it is revealed that convicted murderer Sirius Black (Gary Oldman) has escaped from Azkaban and is coming after Harry. With yet another Defense Against the Dark Arts professor, Remus Lupin (David Thewlis) tries to help Harry defend himself against the Dementors, the soul-sucking guards of Azkaban who have been employed at Hogwarts to protect the students. But they’re the least of his worries.