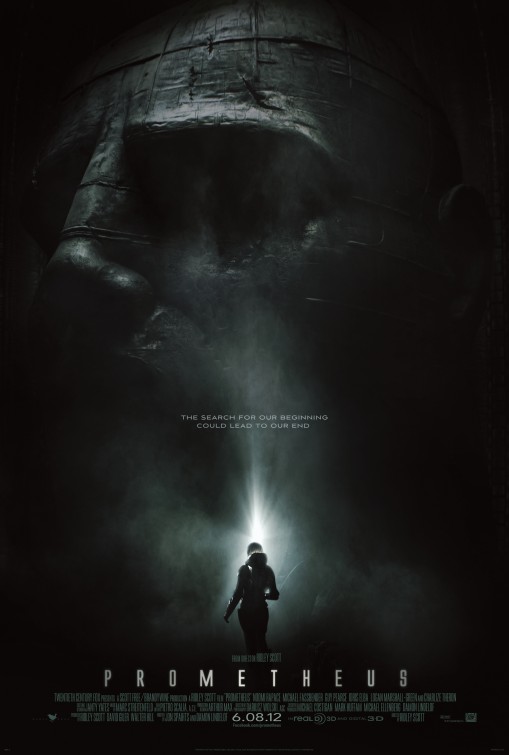 (Published in Issue 11 of my publication In Retrospect)

Directed by Ridley Scott, Prometheus follows a pair of archaeologists, Dr. Elizabeth Shaw (Noomi Rapace) and Dr. Charlie Holloway (Logan Marshall-Green), who discover a star map to the origins of mankind on Earth. Boarded on a ship called Prometheus that is run by Captain Janek (Idris Elba), android David (Michael Fassbender) and Meredith (Charlize Theron), a team of explorers are lead a journey to the darkest corners of the universe where age-old questions are answered and new horrors force the team to face a terrifying battle to save the future of the human race.

A sort-of-prequel to Scott’s 1979 classic sci-fi horror Alien, Prometheus is the fifth film in the Alien franchise but the first in linear terms. Whilst not a direct prequel, leaving room for more prequels to continue, the film is set in the same universe and it does explain some of Alien‘s premise. Still set in the future, Prometheus has a brilliant design. With new technologies and better effects, we can now explore this at a much better quality. And this is the great thing about the film – it is absolutely visually stunning. The first half an hour of the 3D at least are incredible, and the CGI is pretty seamless throughout.

Including many nods to the original film that fans will be able to take note of, Prometheus is also able to work as a stand-alone film which means that you don’t need any beforehand knowledge to enjoy it. One of the main criticisms, however, has been the poor script, but this wasn’t something that I even picked up on. Scott really does immerse you into this universe and because of this I wasn’t trying to find any faults, I was just enjoying the journey.

From a non-Alien fan point of view, the film was really fluid in terms of storyline and detail and whilst I was left a little confused it wasn’t too difficult to piece it all together afterwards. It wasn’t enough to ruin the experience, anyway, and as we all already know, the Blu-ray release of the film will be the director’s cut which will have an additional 30 minutes runtime, so if you’re a little confused about something or distressed that something significant was missed out, then just wait for the Blu-ray release to fill in the gaps.

What I enjoyed most was the suspense, and it’s this fear that Scott has always managed to create with his Alien films. Whilst nothing was particularly scary about the film, though it should have definitely been more than a 15, I found myself constantly squirming in my seat, and this is what I love about the Alien franchise.

The cast was the first thing that attracted me to the film, however. Noomi Rapace is brilliant as Dr Elizabeth Shaw, as she really expresses the intense admiration that her character has. Is she the franchise’s new Sigourney Weaver? It seems that she will be ready to lead another prequel if there were to be one, and I would look forward to seeing that. Her relationship with Logan Marshall-Green’s character is another strong part of the film, as this creates a great background story that adds another layer to the film.

Charlize Theron and Idris Elba are brilliant leads too. Elba, especially, added a personality to the film and he was great as the ship’s captain, whilst Theron, as always, excels with her fiery presence. It was Fassbender’s role that elevated the film, though. His role as robot David was magnificent and his acting really carried the film through.

There was a decent backing cast too, including Sean Harris, Rafe Spall, Emun Elliott, and Benedict Wong. A personally favourite was the inclusion of Emun Elliott who is currently known for his role in BBC Three’s lesbian TV drama Lip Service. It was great to see the actor in a feature film in comparison to this fairly small and not very well-known drama, whilst he did also appear in season one of Game Of Thrones.

Despite all the criticisms, Prometheus is one of my favourite films this year. We all went in with very high expectations and I was fortunate to be one of few that wasn’t let down by what I saw. The story was intriguing, the actors were all brilliant, and the film managed to captivate me both with fear and memorization.

What more can I say?