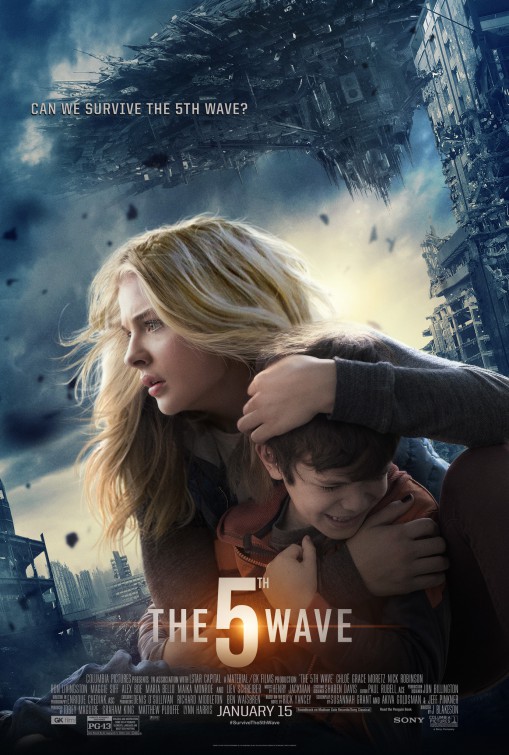 Based on Rick Yancey‘s 2013 young adult dystopia of the same name and directed by J. Blakeson, The 5th Wave centres on 16-year-old Cassie Sullivan (Chloë Grace Moretz), and is premised during an alien invasion after an unknown species have executed four waves of increasingly deadly attacks, leaving most of Earth decimated. The first wave saw an EMP wave take out all electronics and technology, the second saw massive tsunamis around the world take out every coastline, the third saw an infection kill off most of the remaining survivors, and the fourth saw “the people in charge” turn their guns onto those left. But there’s still another wave to come, and it’s bound to be lethal. On the run, Cassie teams up with a young man who may be her final hope – if she can trust him – in a desperate attempt to save her younger brother.

Combining a number of genres, The 5th Wave had a lot to live up to; it had to stand out amongst the ever-growing young adult crowd in terms of characters and relationships, but it also had to create a believable apocalyptic world filled with action and threat.

Similar film franchises like The Hunger Games and Harry Potter have thrived because of their excellent source material, whereas others like Divergent and The Maze Runner have fallen at the waist-side from being poorly adapted. Needing a new young adult dystopian to delve into, I picked up The 5th Wave, which disappointingly falls somewhere in the middle.

Rick Yancey‘s book is an average read, starting off with an intriguing premise, but quickly losing its pace when it places its focus on a love triangle over the world invasion at its core.

The first chapter of the book is incredible, as Yancey takes his time to detail Cassie’s present-day situation by giving us some background information about her life. Moving on to when the alien invasion began and explaining the first four waves, this first, lengthy chapter ends at an emotional turning point in Cassie’s life, as she is forced to bury her mother, witnesses the death of her father, and sees her younger brother driven away to a so-called ‘safe zone’.

With this detail and depth of development put into explaining Cassie’s situation, describing how the world came to be as it is and how Cassie came to be on her own, the book ensures that the world and its characters that Yancey has created are ones we care about. But it is this detail that the film adaptation completely lacks.

What it all comes down to is that the film adaptation tries to over-simplify everything that the book puts its focus into, rushing the slow and convincing reveals of the overlapping stories that make the book so thought-provoking, and turning it into a cheesy, teenage drama, too typical to have any impact as a dystopian apocalypse.

With rushed character and plot development, a story that was once well-thought-out and surprising in turns becomes confusing and stripped of any complications, losing all of the connections and concerns that the audiences felt towards the book.

For younger audiences, the book is relatable with its high school setting and young cast, but without this focus on these characters individually or on relationships, in the film, it’s difficult to see why any of them or their missions matter.

The purpose of having a female lead is so that she can defy our expectations and, for a little while, you do believe that Cassie is a strong and determined character. But as soon as she comes into contact with a male, all of her morals go out of the window, and it is here both the book and the film go terribly wrong.

Whilst the first few chapters of the book explore Cassie’s mindset as she convinces herself to go on and make a difference, persuading herself to kill others to ensure her own safety, which the film doesn’t emphasise at all, as soon as she meets Evan, all she starts to think about is how every part of him smells like chocolate.

It is this focus on ‘love’, and an all-too-distracting love triangle which worms its way in, that will leave older audiences feeling unengaged. If you haven’t read the book beforehand, either, then the film gives you little else to place your interests in, leaving you with a one-dimensional story that ends with a big group hug rather than an ominous cliff-hanger.

Casting wise, nobody really stands out. Chloe Grace Moretz is a great actress, but she brings very little to the role, whilst Nick Robinson and Alex Roe give very unimpressive performances as her love interests. If I had to pick, it would be Liev Schreiber and Maria Bello who make the most impact, whilst many of the smaller characters miss out on a lot of screen time.

The only casting choice that didn’t work, in my opinion, was that of Maika Monroe as Ringer. I had really high hopes for her as she has given some excellent performances over the past year, but they messed her character up so badly that she didn’t stand a chance. Since when did moody and bad-ass mean goth?

On top of that, the special effects look like something cut straight out of Mars Attacks!, which doesn’t help, especially when the visuals of the film could have made a difference, with the story losing the original spark that – most of – the book had.

Sadly, this adaptation will only lower a potential fanbase for this latest young adult franchise, doing the opposite of what a visual-heavy, action-packed film should do for a story that only needed its focuses putting in the right places.

As an adaptation, the film sticks closely to the book in terms of plot, but it loses the strength of character and depth of detail that the book has, completely skipping over the book’s darker themes and, like with most young adult books, letting a horribly unrealistic romance get in the way.

I would definitely recommend reading the book, still, and I will even go on to reading the sequel myself, but the film is a big no-go for me. Avoid it unless you’re under the age of 12 and/or don’t need detail and structure to be entertained.