“I walked home. I kept hearing footsteps behind me, but every time I turned around, no one was there.”

Set to be released on 13th May, Things To Do Before The End Of The World by Emily Barr follows teenager Olivia who is struggling to live her life as fully as she wants to. So when the news breaks that humans have done such damage to the earth that there are only nine months of safe air left, everybody makes a bucket list to start living their best lives. Everyone, that is, but Olivia, who is still struggling to figure out who she wants to be. Then, out of the blue, comes contact from a long-lost cousin who Olivia didn’t even know existed. Natasha is everything Olivia wants to be and more. And as the girls meet up for their last summer on earth, Olivia finds Natasha’s ease and self-confidence having an effect on her. But what if Natasha isn’t everything she first appears to be?

Today is my stop on #TheUltimateTour for this book. Thank you to The Write Reads On Tour and Penguin for a free advance copy of this book in exchange for an honest review.

First off, I have to say that I am not the recommended reading age for this book. But I wanted to read it because I love stories about the end of the world, I still enjoy young adult fiction now and then, and the cover is absolutely gorgeous!

For younger audiences who are possibly experiencing an apocalyptic story for the first time, the concept is used efficiently and given enough detail to be convincing. The recommended reading age is 12-16 years and I feel like it would suit that age group perfectly. Olivia is a likeable character, she has some relatable bucket list goals, and there’s an added thriller element to the story that gives it an exciting edge.

However, older readers who crave more of an apocalyptic thriller may have the same struggles as I did, as the focus isn’t actually on the end of the world. Instead, it’s a backdrop for a coming-of-age story; a set up for Olivia to be brought out of her shell and to do the things she’s been too shy to do while she still has the chance to.

Had I not been expecting more end of the world antics, I would have enjoyed this story a lot more. But it just wasn’t what I expected it to be, and that’s my own fault rather than the authors. The characters were too young for me to relate to and so their priorities were very different to what mine would be in their circumstances.

But don’t let me put you off if you’re looking for a coming-of-age drama with a thriller twist, as this is definitely an appealing book for the right audience. I just wouldn’t recommend it as a book for older readers who are looking for something a little light-hearted.

Things To Do Before The End Of The World by Emily Barr
Release Date: 13th May 2021
Print Length: 359 pages
Genre: Young Adult Dystopia
Publisher: Penguin 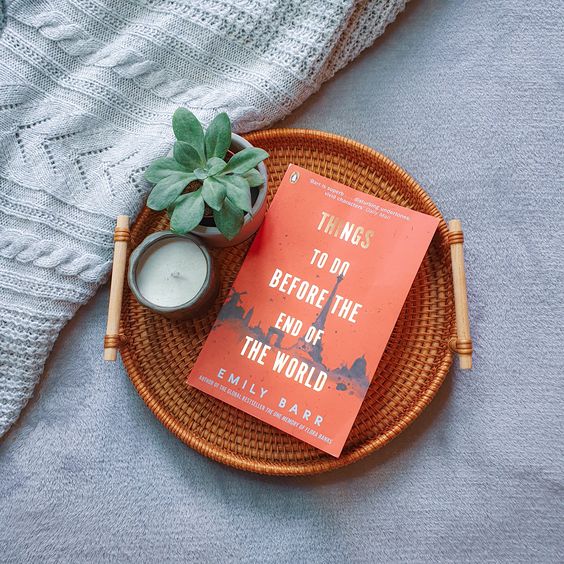 Timely and powerful; the new coming-of-age thriller from the bestselling author of The One Memory of Flora Banks.

What would you do when you hear the news that humans have done such damage to the earth that there might only be a limited amount of safe air left – a year’s worth at most? You’d work through your bucket list, heal rifts, do everything you’ve never been brave enough to do before?

Olivia is struggling to do any of this. What is it that she truly wants to do? Who does she want to be?

Then out of the blue comes contact from a long-lost cousin Olivia didn’t even know existed. Natasha is everything Olivia wants to be and more. And as the girls meet up for a long, hot last summer, Olivia finds Natasha’s ease and self-confidence having an effect on her.

But Natasha definitely isn’t everything she first appears to be…

THE ONE MEMORY OF FLORA BANKS published in 2017 was Emily Barr’s first novel for young adults and was a global hit, published in 27 languages. Before that, she worked as a journalist in London but always hankered after a quiet room and a book to write. She went travelling for a year, which gave her an idea for a novel set in the world of backpackers in Asia. This became BACKPACK, an adult thriller that won the WH Smith New Talent Award, and she has since written eleven more adult novels published in the UK and around the world. She lives in Cornwall with her husband and their children.

2 thoughts on “BOOK TOUR: Things To Do Before The End Of The World by Emily Barr”