“He jumped to his death in front of witnesses. Now his wife is charged with murder…”

Released today (13th May), The Perfect Lie by Jo Spain follows Erin Kennedy who moved to New York following a family tragedy and now lives happily with her detective husband in the scenic seaside town of Newport, Long Island. It’s the start of an ordinary day when Erin answers the door to Danny’s police colleagues one morning. But behind her, Danny walks to the window of their fourth-floor apartment and jumps to his death. Eighteen months later, Erin is in court, charged with her husband’s murder.

Today is my stop on the blog tour for this book. Thank you to NetGalley for a free advance copy of this book in exchange for an honest review.

The Perfect Lie is an intricate and intelligent thriller that is sure to grab your attention. With a shocking opening and bombshells throughout, you’ll still be trying to figure this one out until the very end.

The book switches between three narratives – Erin in the past (from the day she sees Danny jump), Erin in the present (as she’s on trial), and a third in the past through two other characters. It takes a while to see the significance of Ally and Lauren at first, but it’s obvious that their story is going to connect to the present at some point so there’s a lot of mystery to be excited by.

The story in the present is also a bit of puzzle, not giving any details as to how Elin can be on trial for her husband’s murder when the opening chapter sees him jump to his death in front of his colleagues. But Spain’s vagueness is intentional, as the focus is on the build-up to the trial in an attempt to get your mind ticking away.

Normally, this is a narrative technique that I love, but I did end up finding it quite frustrating this time around as the set up went on for too long for me to get into the story properly. I knew that the answers were in the present, but it’s not until the halfway point that her current situation becomes more clear, either. Although your intrigue is strong, there are so many question marks in the first half of the book that I did struggle with trying to fill in the blanks for myself.

The conclusions are really worth the wait, though, and I did find Spain’s tricks and misdirections very clever by the end and understand why she had to structure it this way. There was only one explanation that I wanted and I did guess what was going on, but I wasn’t disappointed by this as I found that Part 3 of the book really justified the cunning start.

The end is wrapped up quite quickly after this, but it doesn’t feel rushed and every one of my questions was answered so I loved the quick turnaround. This ending is most definitely a five-star twist for me, but the set up of the story just took too long for me. Had it been evened out a little more, I would have really loved this.

Nevertheless, it’s a brilliantly written thriller that is sure to impress, and one that I hope will be talked about a lot this summer because it most definitely deserves the praise. 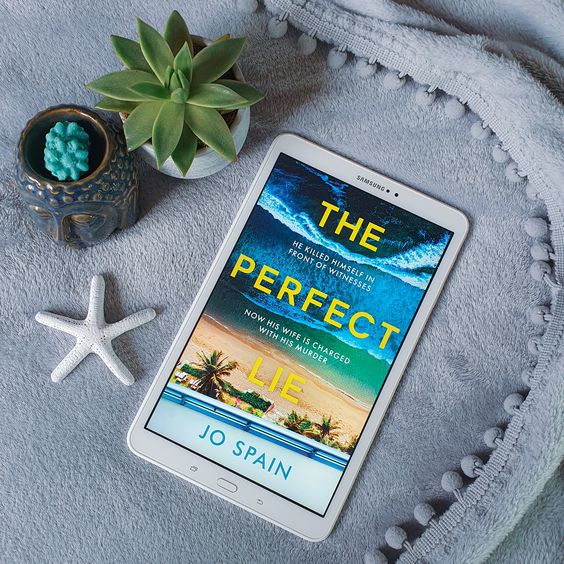 He jumped to his death in front of witnesses. Now his wife is charged with his murder.

Five years ago, Erin Kennedy moved to New York following a family tragedy. She now lives happily with her detective husband in the scenic seaside town of Newport, Long Island. When Erin answers the door to Danny’s police colleagues one morning, it’s the start of an ordinary day. But behind her, Danny walks to the window of their fourth-floor apartment and jumps to his death.

Eighteen months later, Erin is in court, charged with her husband’s murder. Over that year and a half, Erin has learned things about Danny she could never have imagined. She thought he was perfect. She thought their life was perfect. But it was all built on the perfect lie.

Jo Spain is a full-time writer and screenwriter. Her first novel, With Our Blessing, was one of seven books shortlisted in the Richard and Judy Search for a Bestseller competition and her first psychological thriller, The Confession, was a number one bestseller in Ireland. Jo co-wrote the ground-breaking television series Taken Down, which first broadcast in Ireland in 2018. She’s now working on multiple European television projects. Jo lives in Dublin with her husband and their four young children.