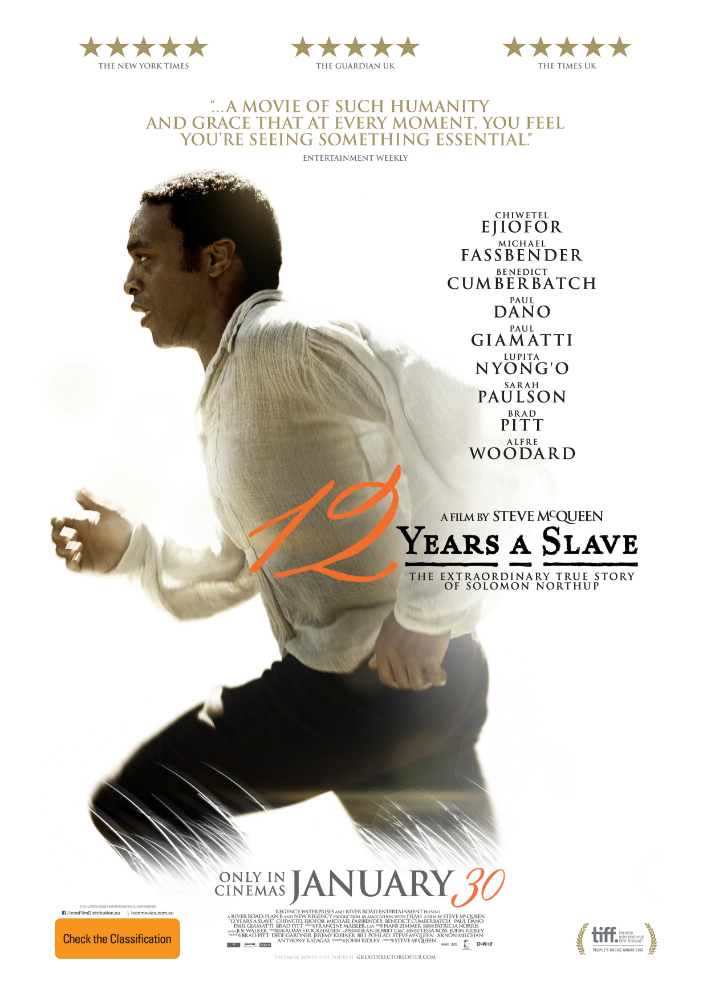 Based on a true story and in part on Solomon Northup‘s memoirs of the same name, 12 Years A Slave, directed by Steve McQueen, follows the remarkable true story of a free black man from upstate New York, Solomon Northup (Chiwetel Ejiofor), who is abducted and sold into slavery. Forced to work on a plantation in New Orleans in the 1800s, experiencing the brutalities of those who believe they have the right to abuse their slaves such as Edwin Epps (Michael Fassbender) and carpenter John Tibeats (Paul Dano), and ignorances of the population, including that of plantation owner William Ford (Benedict Cumberbatch), will Solomon ever make it back to his family and home?

Dealing with its subject matter honestly, this uncompromising look at slavery was even more difficult to watch than I imagined it would be. Reducing me to tears more than once, the camera is held for minutes at a time to show the full impact of some of the worst of situations that these people had to live with on a daily basis. The violence is enough to make you wince, but directed Steve McQueen knows how to handle such bleak topics excellently, with his best examples including Shame and Hunger. His filmography is a showcase of powerful work because he does not shy away by desensitising such realities; it made be hard to watch, but that’s how it went. Letting us see every lash of the whip, every scar, and every tear from these people, nothing is held back. But the most depressing thing is that is only one man’s story and, in fact, this happened to hundreds of more men, women, and children, most without such a happy ending. Its story is heartbreaking and effectively eye-opening in its seriousness, but also stunning in its delivery at the same time, with beautiful location shots and a lovely score.

Chiwetel Ejiofor holds the camera with extraordinary integrity and in my eyes should have been the Oscar winner for Best Actor, though co-star Lupita Nyong’o was well deserving of her Best Supporting Actress win. The cast all deliver some of their best performances, with Michael Fassbender, especially, giving a dark performance that makes the journey all the more uncomfortable to witness. This extraordinary cast comes together incredibly and is half of what makes 12 Years A Slave such a magnificent achievement. But 12 Years A Slave is about more than just its cast, as it is a truly impressive piece of film-making from an exceptional director, and will be near impossible to better this year.