“George Orwell was wrong, she thinks. In the future, it won’t be the state that keeps tabs on everyone by extensive use of surveillance; it will be the people. They’ll do the state’s work for it by constantly uploading their locations, interests, food preferences, restaurant choices, political ideas, and hobbies to Facebook, Twitter, Instagram, and other social media sites. We are our own secret police.”

The Chain is a 2019 thriller by Adrian McKinty which follows Rachel as she heads into Boston for an early morning oncology appointment. She believes her 13-year old daughter is getting on the bus and heading off to school, just like any other day. But then her phone rings. The call is from a stranger who says that she has kidnapped her daughter. To get her daughter back, she must abduct somebody else’s child. If she doesn’t, her child will be killed. Rachel is now a part of The Chain. “You are not the first, and you will certainly not be the last.”

The Chain is certainly a page-turner, and if you’ve read anything about it, you’ll know why. It has a clever and unique premise that is sure to entice a lot of readers. But does it live up to the hype? While I liked the story and was eager to read on, I didn’t find myself getting excited by it.

Since the blurb and cover give away the main premise, the story gets straight to the point and the action comes at you in full force. But while it’s a brilliant and intriguing concept, it’s simply told. Certain things that I wanted to know more about are described in a single sentence, as the narration often skips on detail. The chapters are short which I love and there were many times that I was eager to know what happened next, but so much happens on a single page that there isn’t enough time for suspense.

This also means that the ending is rushed, too. There’s a lot of talk about Rachel’s cancer, but I didn’t see the point in her being ill in the end. Was it just to make her character physically weaker? Or was it to make her mentally stronger? Maybe it was just so that we would doubt her abilities. Either way, I was expecting a more personal touch in the closing chapters, but there wasn’t enough time left to see how the characters all individually transformed.

I think the reason that I couldn’t get into the story properly was because it lacked a distinct voice. The dialogue is poor, often used to describe what was going on rather than feeling like an actual conversation between people. You can tell that McKinty isn’t American, as well. The conversations didn’t feel like real people talking, and their voices didn’t feel individual to their character. For one example, Marty often called Rachel “Sweetie” in a condescending manner, but then Peter began to do this as well, which didn’t feel like his character at all.

I often felt this lack of consistency and sharpening of detail which only exaggerated the rushed feeling. In terms of quality and development, there are too many missed opportunities that don’t reach their full potential. While the book explores how far you would go to protect the ones you love, Rachel seems to fit into her new role quite easily. She makes a few comments about how it shouldn’t be normal to be having these thoughts and it’s obvious that she’s desperate to get her daughter back, but I didn’t feel the struggle in her head about having to do something so horrible. She was quick to accept what she had to do and wasn’t torn about her decision to go through with it.

Another thing that disrupted my reading was that the chapters weren’t attributed to a character or time. Only a few are given a date stamp in the beginning, but then when the chapters start to skip back years, it isn’t made clear. Written in the third person, it’s also often confusing as to who the chapter is talking about. There’s a lot of “She did this” and “He did that”, so it’s not until halfway through a chapter that you know who you’re reading about, as it feels like you’re observing the characters from afar and don’t know whether this is the case or not.

What I liked about the story is that McKinty explores the story from every angle and tackles many different obstacles in a situation that could have gone in many different ways. Margaret and Oliver are great characters and it’s their evilness that really drives the story. But I wanted to get to know more about them and earlier on. I think it would have worked much better if their chapters were linked in from the beginning, alternating between Rachel and The Chain to show us more from their point of view, as they puppeteer their plan while the story also begins to explore their past. This way, the main twist could have then been played in more slowly and subtly, as it’s pretty obvious what’s coming as soon as Margaret’s character makes her main appearance.

While there’s a lot about this book that I’ve picked apart in my review, I did enjoy reading it and it would make a great holiday read. It would be the ideal story to be adapted into a TV series, so I look forward to the likely possibility of someone developing and expanding upon McKinty’s fantastic concepts. 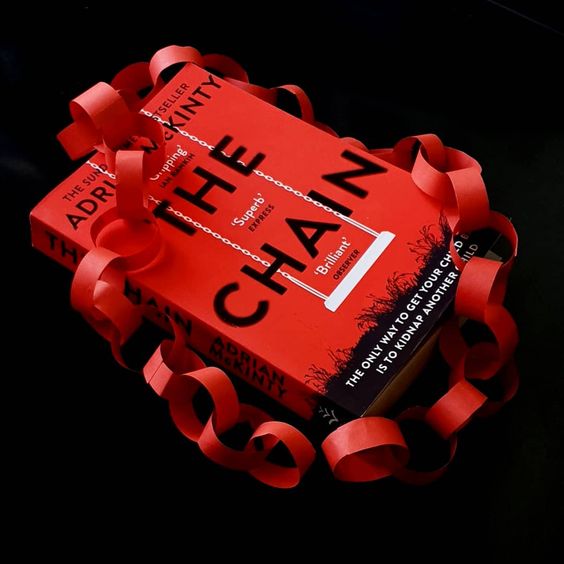