“No one could be expected to give up wine and books at the same time.”

Published in 2019, Nine Perfect Strangers by Liane Moriarty follows nine strangers on a ten-day retreat at Tranquillum House, a health-and-wellness resort that promises total transformation. Keen to drop their literal and mental baggage and absorb the meditative ambience while enjoying their hot stone massages, these strangers are miles from anywhere, without cars or phones, and they have no way to reach the outside world. Watching over them is the resort’s director, a woman on a mission. But quite a different one from any the guests might have imagined. For behind the retreat’s glamorous facade lies a dark agenda. These nine perfect strangers have no idea what’s about to hit them…

Nine Perfect Strangers is a book that you will either love or hate. But whatever you think, you’ll have to agree that it’s an absolute trip. While there is plenty that will certainly take you by surprise, it probably won’t be in the way that you were hoping for…

My only advice is: don’t go into this book expecting a thriller. Then, you will be more likely to come away loving it. But if you’re expecting dark twists and a well-rounded story arc with an evil puppeteer pulling the strings to ruin these guests’ idyllic break, you may be disappointed. It’s not far from that, but it also couldn’t be further from that at the same time.

It’s a bit of a ludicrous plot, really, but Moriarty ties up the story so well that I can’t help but come away with good memories of it. With a lot of humour and sarcasm, Moriarty makes some great observations. But there are many warm and touching moments, too, with a diverse set of characters who share their various issues of grief, regret, body image, and disappointment.

Moriarty is all about her characters, and these nine strangers are a brilliant bunch to be around. They’re welcoming, humorous and, most of all, they just want to have a nice break and learn something about themselves. It is these characters that you have to put your faith in, and it is from their point of view that you have to judge this story on.

I did expect more because I did think that this was going to be more of a thriller, but I had an absolute riot reading this. I just can’t decide if I’ve been tricked into thinking that or not!

Still, I can’t wait to read more from Moriarty. I just hope her next book is a little more grounded! I feel like I need a rest. 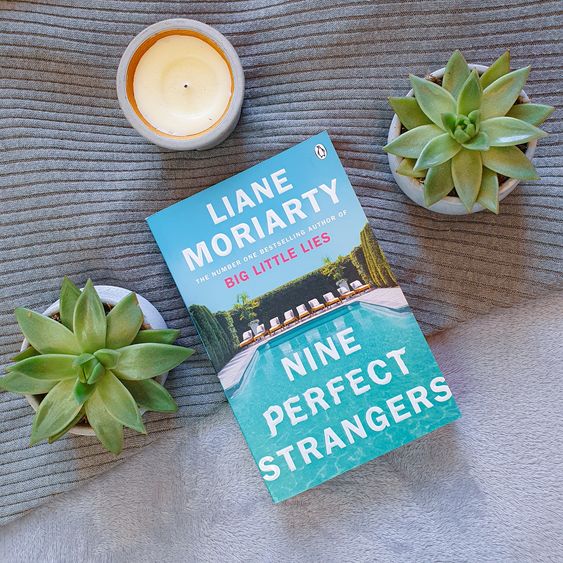