“Welcome to Caraval, where nothing is quite what it seems…”

Published in 2017 and the first book in a trilogy, Caraval by Stephanie Garber follows sisters Scarlett and Tella who have never left the tiny isle of Trisda. Scarlett pines from afar for the wonder of Caraval, a once-a-year week-long performance where the audience participates in the show. To Scarlett and Tella, it represents freedom and an escape from their ruthless, abusive father. So when their long-awaited invitation to Caraval finally arrives, it seems their dreams have come true. But no sooner have they arrived than Tella vanishes, kidnapped by the show’s mastermind organiser, Legend. Scarlett has been told that everything that happens during Caraval is only an elaborate performance. Nevertheless, she quickly becomes enmeshed in a dangerous game of love, magic and heartbreak. And real or not, she must find Tella before the game is over, and her sister disappears forever.

It’s not often that I dive into fantasy, but I loved The Night Circus by Erin Morgenstern and this sounded quite similar, so I couldn’t wait to be transported into a new world of magic and mystery.

Just as I would hope from a fantasy set in a fictional world, Garber’s world-building is exceptional. I could really picture Caraval, imagine myself walking the winding streets, picture Scarlett’s elegant clothing, and see the ever-changing face of Legend blurring from character to character.

I love it when that kind of enchantment takes over you, and it’s exactly what I wanted from this book: to be swept away in hopes and wishes, a touch of romance, and an exciting adventure. I did hope for more magic itself to be involved in the clues that Scarlett has to solve, but it’s an easy story to follow and be charmed by.

Admittedly, it did take me a while to get into it properly as you’re told from the very beginning not to believe anything that happens on Caraval, so it’s a little frustrating when the main character believes every single thing happens to her. Although I grew to really like Scarlett, she was often too gullible and vulnerable to lead this adventure more strongly, but she does eventually get to where she needed to be.

The sisterly bond is quite confrontational at times, too, so it was difficult to feel an instant attachment, but it all comes together towards the end of the story which is when I really began to love it.

This is definitely a book that I intend to re-read in the future, and I look forward to picking up the second book to continue the series, as well. 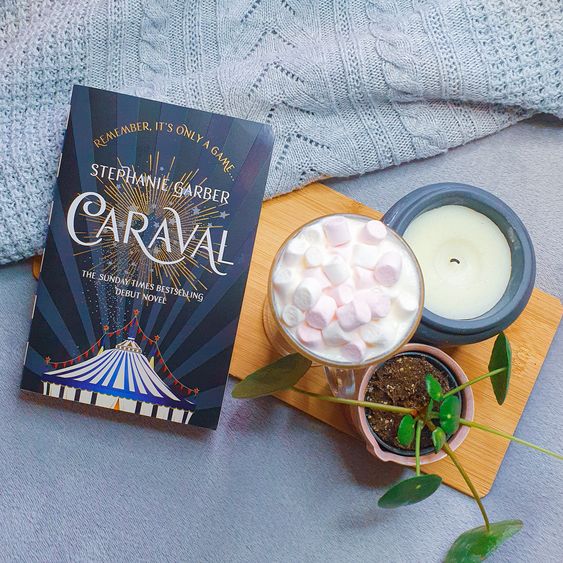 One thought on “Book Review: Caraval (Caraval #1) by Stephanie Garber”