“You can choose your house. Not your neighbours.”

Set to be published on 19th January, Those People Next Door by Kia Abdullah follows the new residents of Blenheim, Salma Khatun and her family, who are extremely hopeful about moving to a safe suburban development. Their family is in desperate need of a fresh start, and Blenheim feels like the place to make that happen.

Not long after they move in, Salma spots her neighbour, Tom Hutton, ripping out the anti-racist banner she put in her front garden. She chooses not to confront Tom because she wants to fit in. It’s a small thing, really. No need to make a fuss. So Salma takes the banner inside and puts it in her window instead.

But the next morning she wakes up to find her window smeared with paint. This time she does confront Tom, and the battle lines between the two families are drawn. As things begin to escalate and the stakes become higher and higher, it’s clear that a reckoning is coming… And someone is going to get hurt.

A powerfully impactful and thought-provoking thriller, Those People Next Door is a strongly-explored contemporary story about how small acts can easily spin out of control, as this ultimately heartbreaking game of retaliation results in.

The reasons why I like to read Abdullah’s books so much are two-fold. First, I know her books always promise a diverse set of characters and will tackle relevant social issues in an incredibly balanced way. With the main themes of Those People Next Door being class and race, there’s so much that Abdullah manages to explore, from unconscious bias to prejudices on all sides. But no character is left blameless, as Abdullah looks at the story equally from both perspectives to craft a story that is sure to make you think twice before acting or responding in haste.

My second reason is that I always expect Abdullah to take things one step further to completely blow your mind. Stupidly, I thought the plot of this one seemed quite domestic and straightforward, so I thought I had it sussed out quite early on. Of course, I should have known that that wouldn’t be the case! The tension builds and builds as things escalate dramatically. And just when I thought things had settled, Abdullah throws in even more curveballs, and I’m still left with my jaw hanging open.

If you’ve not read a book by Kia Abdullah before, you need to get on! She is always an author that I recommend, and I haven’t been disappointed by her yet!

The audiobook is narrated by Tania Rodrigues who has narrated all of Abdullah’s books so far, and it’s easy to see why Abdullah puts her trust in her. Rodrigues does a fantastic job of engaging you in the story, and narrates it so clearly that it reads perfectly at a fast speed (which I always find useful!). 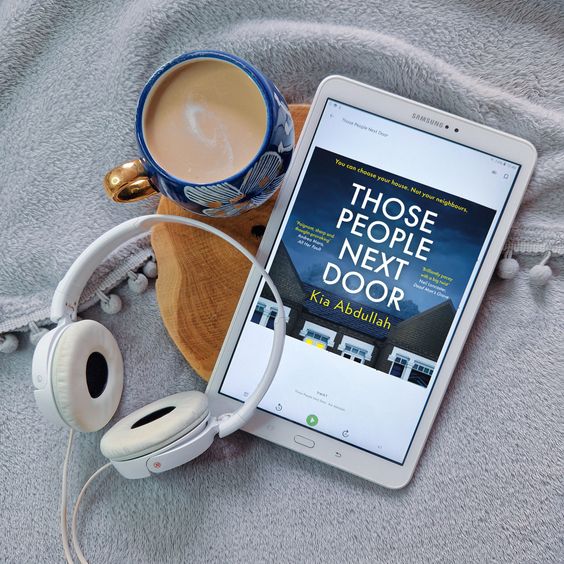 3 thoughts on “Book Review: Those People Next Door by Kia Abdullah”