“Ten years of marriage. Ten years of secrets. And an anniversary they will never forget.”

Set to be published on 19th August, Rock Paper Scissors by Alice Feeney follows Mr and Mrs Wright, whose marriage hasn’t been right for a long time. So when Adam and Amelia win a weekend away to Scotland, it might be just what their marriage needs. They both know this weekend will make or break their marriage, but they didn’t randomly win this trip. One of them is lying, and someone doesn’t want them to live happily ever after.

I read His & Hers earlier this year and loved the chilling atmosphere that Alice Feeney crafted with her narrative, so I was eager to pick up her latest book.

And just in the same way, you can feel every goosebump in Rock Paper Scissors. The dark ambience looms over these complex characters, two halves of a couple who have come to a standstill in their marriage, having taken a weekend away as a last effort to see if they can make things work.

The chapters interchange between Adam’s narrative and that of his wife’s, told through a series of unsent letters that she writes to him every year on their anniversary and titled after the traditional gift for that year. This shift in perspectives allows you to see two different sides to their marriage, as you begin to question who’s to blame for the lack of trust and whether there is any hope left.

The contrasting points of view mean that you never really know who to trust, which is what will have you devouring this book so rapidly. Both seem threatened by something as the build-up intensifies, as both Adam and Amelia appear to be at breaking point and on the verge of acting out.

As if the characters weren’t reliable enough, Adam also suffers from “Prosopagnosia”, a neurological glitch that means he cannot see distinguishing features on faces. So with Adam’s inability to recognise strangers from family, you really don’t know who to believe. Set that in an isolated and seemingly haunted chapel, and Rock Paper Scissors is sure to make your heart rate quicken.

Unfortunately, I ruined this one for myself a little as I stopped myself at the beginning to come up with a far-out prediction, and managed to guess some of what was to come. So although that was my own fault for trying too hard to guess what would be a good twist, that did weaken my experience of reading this one slightly.

Still, I love Feeney’s writing and character development. And of course, there was a lot that I didn’t see coming, so you’re definitely in for a shocking read, with plenty to keep you gripped along the way. 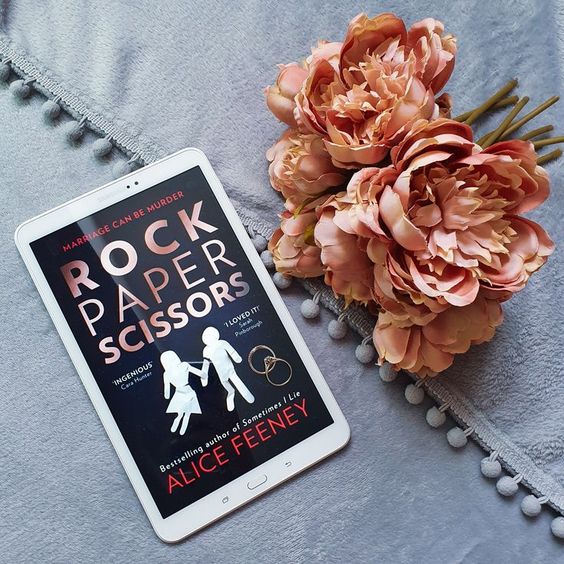